I will tell you that you successfully purchased GoPro Fusion the other day, but arrived safely in 2 days after purchase! !

About as fast as Amazon

I bought it on January 9th and arrived on the afternoon of January 11th.It was an imported item, but I was surprised to arrive early.

It is included in the package. A sticker is also included.

Besides the main body, it is contents such as cover / selfie stick & mini tripod / 2 kinds of adhesive mount / USB-C / battery / instructions. It is nice to have a mini tripod!

Half of the body is a battery

Here is where to put the battery. Half of the main body is occupied.

Two microSD cards will be inserted

Insertion point of microSD. Put them on both sides of the battery. At first it was hard to get in, but I soon got accustomed.

Below is the cable of GoPro Fusion. Please note that the standard is USB-C.

Because the cable terminal standard is USB-C, Android microUSB cable can not be used. It is modern.

The mini tripod is preeminent in stability, so it seems that there is no problem even if the feet are unstable a little!

Because the grip is thick, it is extremely easy to hold, weighs little too much.I have some mini tripods, but this is the easiest to use. It is great to come with the included.

It is an adhesive mount that can be affixed to a helmet etc. With GoPro Fusion attached, you can shoot various scenes.

Case is simple and easy to use

It is an accessory case. Simple and wonderful.

There is no problem even with a mini tripod

Even more pleasing, the lower half of the cover is empty, so you can wear the cover even with the mini tripod attached. It is very helpful at carrying. That idea is wonderful.

There is almost no blur even when shooting by walking!Not need a gimbal!

Please see sample movie。The top is a GoPro Fusion shoot, the bottom is a video shot with TEHTA V.

※To watch from a smartphone, please click the video title link and see it on YouTube application.

What do you think? GoPro Fusion obviously has less blurring and is very smooth.

THETA V is bluish in color, but GoPro Fusion is more like an actual picture. It is clear.

The conventional 360 ° camera shakes greatly when moving at the time of movie shooting and it is necessary to reduce blurring later with editing software or to reduce blur by using special equipment called gimbal did. (Extremely troublesome)

But, in GoPro Fusion, blur processing is performed automatically when outputting after shooting, so you can quickly display high quality images without editing.

GoPro, famous for action cameras, is very satisfied, as there is no need for “gimbal.” Even this alone is worth buying.

I compared the shooting of still images.

Although there are some differences when looking carefully, I feel that there is not much difference between the still picture quality of GoPro Fusion and THETA V. THETA V is somewhat dark.

In the test image above, there are many red spots called “flare” in THETA V, but GoPro Fusion has no flare and you can shoot beautifully.

Although I did not introduce it here, in indoor shooting, THETA V can shoot more beautifully.

I tried using GoPro Fusion. Other good points will be introduced.

The body is light. It is not heavy even if you put a self stick.

The weight is about 200 g and it is heavy compared to other 360 ° cameras, but because of the palm-sized and compact size I did not care about weight.It is easy to carry around.

The seams were cleanly processed and satisfied

Because it will auto-stitch (seam correction) when exporting in the application, seams are not nearly worrisome.
However, due to the characteristics of the twin-lens 360 ° camera, if the close-up is done too much, the seam will be cautioned.

Although I have touched some 360 ° cameras so far, there are many things that are unstable in operation, such as disconnection of the connection, because it is difficult to connect to the smartphone application.

I did not expect it this time, but I was impressed! Open the application and the connection of about 2 taps is completed. It remains connected.I am able to shoot with confidence.

The status screen is mounted in the upper left corner of the main unit, and switching of the shooting mode and various settings can be operated only with the main unit. You can shoot instantly without connecting to the application. I am happy.

Can switch the resolution of video

By default, it is GoPro Fusion which can shoot at high resolution of 5.2 K / 30 FPS, but slow motion shooting is also possible as it can also be switched to 3 K / 60 FPS. This is the specification unique to the action camera series. I have not tried it yet so I will try it up and upload it to YouTube.

Over capture function is excellent

After taking a picture with 360 ° movie, the function that can create a flat movie cut out the angle you like with editing software is called over capture function.

In ordinary planar shooting, it is necessary to decide the angle to shoot, but if you use GoPro Fusion ‘s overcapture function, you can shoot 360 ° without deciding the angle and later edit it to your preferred angle .

As a result of pursuing efficient shooting, rather than pursuing a way to display in VR, the concept of overcapture was born, and GoPro Fusion was born.

You can shoot with Voice Control

GoPro Fusion does not only operate on applications and the main unit, but also supports voice control.

For example, saying “GoPro video start”, movie shooting starts and you can end shooting with “GoPro Video Stop”. In addition, it supports about 10 types of audio control, such as changing the shooting mode and turning off the power, and the accuracy has also improved greatly.

Useful when hands can not be used!

Waterproof up to 5m without waterproof case

When photographing in the water, GoPro usually requires a waterproof case called a housing.

But GoPro Fusion is waterproof up to 5 m without waterproof case! ! too amazing···.

But I am scared somewhat and have not tried it yet. . .

GoPro Fusion has four microphones and supports 360 ° voice recording as well. Since it corresponds 360 ° not only to video but also to audio, when experiencing with VR headset etc., we can experience more immersive feeling.

You can shoot still images with RAW shooting

When shooting a still image, you can set the output data to RAW mode, so it is best for those who want to edit them carefully. This is a professional specification.

I will introduce the subtle points of GoPro Fusion.

“I want to show it to my family only” “I want to share it with her”, it is troublesome because you have to restrict Facebook and make it public.
When saving photos locally on a PC and sharing photos to LINE, it will not be a 360 ° image. shock.

In that respect, since the THETA series is a Japanese manufacturer, we support LINE sharing and THETA got a match up in that it can easily be shared.

I can not set the start position in SNS post

If you are a THETA application you can specify direction when posting, so we would like you to implement this in the GoPro application as soon as possible.

When publishing on blogs and HP, you can upload movie shoot to YouTube, but for still images there is no embedded widget for exclusive use, you need to use WordPress plugin etc.

With this method, you need to upload images in WordPress. Because I do not want to do as much as possible in order to put pressure on server capacity.

If you have a widget that you can upload still images from the application and embed them in your blog like the THETA series, it’s pretty nice. I expect it in the future.

Points to note when selecting a microSD card

GoPro Fusion does not work without two microSD cards.

In addition, it is easy to cause errors unless you have a microSD card with some specifications, so we will introduce points and precautions when purchasing a microSD card.

Since GoPro Fusion deals with data with a very large capacity of 5.2 K at maximum, if the capacity of the microSD card is 36GB or less, it can not Photographing satisfactorily.

We recommend using at least two microSD cards of 36GB or more, but I think that it is safe to purchase two 64GB cards for traveling purposes.

There are various kinds of microSD cards, but besides capacity, there are important points that become ‘transfer speed’ and ‘standard’.

“Transfer speed” is the speed at which data transfer is carried out as its name implies. The transfer speed is clearly stated on the card, and the unit called “class” is used. (2 is the lowest class and 10 is the highest class)

On GoPro’s official website we recommend class 10 or higher, but recently more than 10 class “UHS class” units have appeared, and if you have enough money you are advised to choose UHS class 3.

If you do not understand well, we recommend that you buy two microSD cards below.

GoPro encourages both cards to use the same spec. It seems that if you use cards of different specifications in front and rear cameras, there will be a difference in the transfer speed and it will affect them.

Actually, I used the card of another spec first, but I got a transfer error, I got an error during shooting and forcibly ended shooting. (It may be caused by low specification of one side · · ·)

I am not yet using all the functions yet, but for now I’m satisfied with “I’m glad I bought !!!”.

At the moment we use THETA V for still image shooting and GoPro Fusion for movie shooting.

The point that I am not satisfied with now is supposed to be updated in the future, so I’m sure that the satisfaction level will surely rise.

LINE I’m very sorry that I can not share it, otherwise I am satisfied. The price is expensive, but people who like to travel, active people, those who are interested in 360 ° shooting can have it. 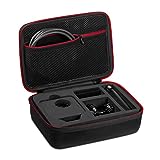 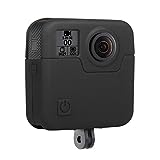 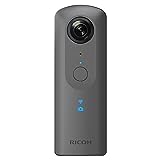